Catherine Galitza has been attacked by an intruder and thrown down a stairwell. As she struggles to come to terms with her injuries, two very different men seem anxious to uncover the truth of what happened.

Both Terry Devlin, Irish entrepreneur and local boy made good, who acquired Catherine's family home in Ireland by what may have been dubious means, and Simon Jardine, social misfit and business partner of Catherine's new husband, Ben, appear to be motivated by love and admiration. But at heart they may well have other interests . . .

Catherine has been receiving nuisance calls. Ben Galitza, once a womaniser, is in serious financial trouble. Terry Devlin is pulling a lot of strings . . .

Then the police find a suspect. A known thief and drug user, but someone is trying to keep him from talking. And it seems Catherine is being stalked all over again . . .

'Francis is adept at creating a mood of suspense, and her reworking of a classic film noir plot has some authentically chilling moments'
- Times Metro 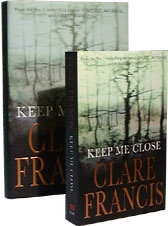